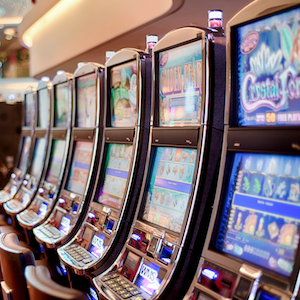 The Hard Rock Hotel and Casino in Atlantic City has unveiled an unusual new initiative. A series of new online slots have been released, although this batch certainly isn’t what would be expected. The games, although available to play online, are in fact physically located in the casino itself. Via an elaborate custom camera system and direct link to the Internet, the physical slots are accessible to online players.

Each of the 12 new games are securely stored in the Hard Rock Hotel and Casino, in what is being referred to as an off-limits room. This means that, for the most part, the only visitors to the area are via live, streaming camera.

It was explained via press release that a tech company named Softweave was responsible for designing the unique setup. The name of the project was WINAFAR, and had been worked on behind closed doors for a number of months. According to a Softweave spokesman, the concept was simple; land-based slots were to be combined with the online community, creating a next generation solution that was the best of both worlds.

Now, after Softweave tackled WINAFAR and created an elegant solution, Hard Rock Hotel and Casino is the first to offer this interesting option to online players. As to whether the concept catches on remains to be seen, but Spajic seems confident that he was found a winning concept.

Online Versus Land Based

In elaborating on the WINAFAR project, Spajic did not beat around the bush. He stated simply that some players have a fear of playing online slots as they don’t consider them to be fair or as good as the real thing, and that this solution offered them an alternative. He pointed out that the camera provided a view much as if the player were simply sitting in front of a physical machine, which was what many had been asking for.

President at Hard Rock Atlantic City, Joe Lupo, was more subtle. He commented that the idea behind WINAFAR was offering transparency and providing all types of players with a solution they were comfortable with.  He stressed that for many looking at an image of an online slot, and a stream of a physical slot, were two very different things. So for those, a live stream was the best possible solution.