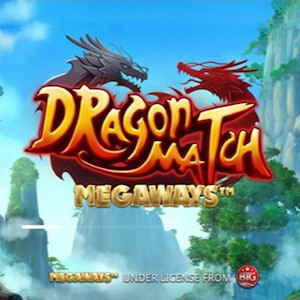 The latest edition in iSoftBet’s popular Megaways series rides the increasingly popular wave of Asia-inspired slots. Like its predecessor, Majestic Megaways, Dragon Match Megaways does not have the standard 3 rows and 5reels. Rather, it has 4vertical reels, each featuring between 2 and 7 symbols, plus 2 horizontal reels. This makes for up to 3 136 ways to win and a maximum payout of over 10 000x.

Volatility in Dragon Match Megaways varies between medium and high, depending on the stage of play, and offers an average return to player of 95.99%. This is packaged in a visually appealing theme, featuring all the quintessential elements of the Far East.

Over to the Orient

iSoftBet has travelled East from the Savannah setting of the last Megaways slot in creating the look and feel of Dragon Match Megaways.

The backdrop of the reels is a vista of the undisturbed mountainous Asian wilderness, with rocky peaks punctuating the mist-cloaked skyline. In the foreground, players will see a meticulously manicured oriental garden, decorated with red bridges that stretch as far as the eye can see.

The reels themselves are set under the awning of an intricately constructed pagoda, flanked by golden dragons on either side. Theme-appropriate symbols include a brilliant blue ornament, an Asian drum, a lotus flower, a pile of gold, and an imposing dragon. The dragon awards the highest symbol payout of 20x the wager for four of a kind on a reel. The usual royal playing card symbols have been given an Eastern flair and pay out the least of all the symbols.

These engaging Dragon Match Megaways visuals are complemented by a soothing soundtrack of traditional oriental string and percussion instruments.

Majestic Megaways slots fans will be pleased to note that this new incarnation has retained its much-loved cascade feature. After each winning combination, the winning symbols are replaced with new symbols that cascade into place to create further payout potential.

Fittingly, the dragon is the game’s Wild symbol and can stand in for any other symbol except the Scatter to complete winning combinations. When two of the same symbols appear on the horizontal bonus reels at the top of the screen, these symbols are turned Wild, as do any of the same symbol appearing in the two reels below.

Dragon Match Megaways really picks up speed during free spins, which are triggered when two Dragon Match logo Scatter symbols appear on the bonus reels. Players may then choose between four different bonus options, each with a different combination of free spins and multipliers. Free spins range from five to 12, while multipliers range from x1 to x5. Each of these games offers a varying volatility level.

Dragon Match Megaways has plenty to offer in terms of visuals and game play. Players who enjoyed the Majestic Megaways slot are sure to appreciate this fresh new option, particularly if they are partial to all things Asian.