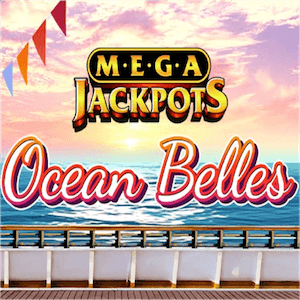 The global online gambling industry was abuzz last week with the news that International Game Technology’s (IGT) hit MegaJackpots network had expanded with the introduction of a brand new slot. Ocean Belles is the latest title from the renowned Nevadan gaming tech developer to enter players into the massive MegaJackpots progressive prize pool, with six-digit wins in the offing.

Ocean Belles has strong visual appeal to go along with its potentially life-changing payouts, plus a host of special features, including stacked wild reels, free spins and bonus games. All of this is offset by the lower than average return to player common with progressive jackpot slots.

Aside from the fact that it puts players in the running for massive payouts – the largest so far being £2 148 947 – on the MegaJackpots network, the Ocean Belles slot’s greatest draw card is probably its visual artistry.

The five reels of Ocean Belles overlook the deck of a luxury cruise liner, captained by a stunning blonde and her crew of seafaring beauties. Sourced from the work of Gil Elvgren, the celebrated American artist responsible for the 1940s Coca-Cola pin-up girl ads, the characters ooze authentic vintage charm, despite the simplistic soundtrack to which they move.

Symbols in keeping with this nautical theme include a ship’s anchor, a lighthouse, a navigator’s globe, and a ship’s wheel, as well as the Ocean Belles flaxen-haired captain and her crewmembers in various flirtatious poses. This is in addition to the usual royal playing card symbols.

Players of this new IGT title will want to collect kiss symbols, because these lead to the largest payouts. Collecting two or more kiss symbols on a single reel activates a wild reel for the following two spins, while landing five golden kiss symbols is the ticket to the MegaJackpots progressive payout.

Additionally, Ocean Belles players will encounter random stacked symbols during spins to enhance payout potential, with the option to select a number of free spins and wild reels in the slot’s bonus games.

While, at 92.5%, the return to player on this game is lower than that of many other slots, this is offset by the large jackpot in the offing for lucky (and patient!) players. The idea is to play the long game, with smaller wagers over an extended period of play in search of that ultimate six-figure jackpot.