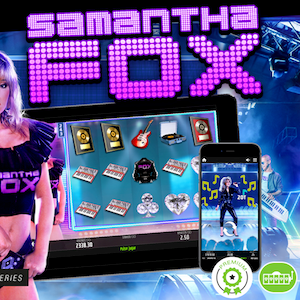 English 80s teen idol, artist, singer and model Samantha Fox is the star of the first of a new online slot’s series planned for release by MGA Games. This means that Fox will star in and lend her name and brand-persona to MGA Games’ first ever slot released as part of the developer’s exciting new Hyperrealism Series.

The range is expected to stand out from the rest of the crowd based on the premium nature of its star-studded upcoming cast of protagonists. Not only will the new online slot base its future success on the celebrity-style popularity of the beloved characters and personalities featured, but it also endeavours to blaze new trails when it comes to the quality of its life-like graphics and images.

Fox Is A Timeless Icon

The incredibly popular persona that is the magic behind the Samantha Fox movement remains poignantly prominent and present in popular culture to this very day. The general feeling is that since The Beatles, there was never again hailed any celebrity better known than the enigma that is Samantha Fox.

Her popular track “Touch Me” catapulted her name and brand and music all the way to into the Top 5 positions in the U.K. as well as in the United States. In fact, the very same made its way all the way into the number 1 position in no fewer than 17 countries around the world. She was by any and every standard, and in many ways still is, a cult-culture music world icon. Best of all is that Samantha Fox to this day continues to wow her audiences the world over.

Since what MGA Games has done was to create a worthy and on-the-mark tribute to the famous English artist, it can safely be assumed that the first slot in MGA’s Hyperrealism Series of Slots will in no way go unnoticed.

The new online slot includes a total of 4 mini games that act as a combined showcase of a career celebrated in images, photo-shoot sessions, the signing of autographs and recording in studio and on-stage. The game is played on a standard set of 5 reels and 3 rows and in terms of paylines, players can look forward to enjoying 243 ways-to-win.