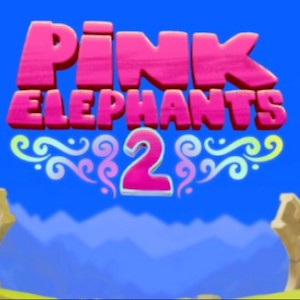 The Pink Elephants slot game from Thunderkick is not what could be called ordinary. Featuring a bizarre, surreal theme that appears stolen from a dream, the title caught players eye simply because it defied conventions. Now Pink Elephants 2 has been released, and this follow-up game is certainly no less strange than its predecessor.

Mysterious, yet enchanting surreal landscapes act as the game’s backdrop, while a host of unusual animal characters are the centre of attention. The titular pink elephant takes centre stage and is joined by an equally as odd cast of supporting goat creatures. What the story is behind Pink Elephants 2 isn’t exactly clear, but the curious mysteries have certainly captured the imagination of players around the world. Strange or not, it is still an excellent slot.

Pink Elephants 2 utilises a 5 reel, 5 row system, backed up by 4,096 Ways to Win. The RTP is 96.13%, and it is ranked as high volatility. In terms of special features, there is a boat load, including Mystery Scatters, Free Spins, Symbol Transformations, and more. Plus, the gameplay magic has been worked in masterfully with the theme, all coming together to create a truly engaging experience.

As far as symbols are concerned, the elephant is the highest paying in the slot. The cast of goats also pays high. The low symbols are the slightly less surreal 9, 10, J, Q, K and A. Though even these recognisable playing card icons have been given a suitably peculiar makeover.

The Golden Peanut, which is apparently what an enormous pink elephant creature loves, acts as the Scatter. Matching 3 of these Scatters triggers the slot’s bonus round, which is where things kick into high gear. Elephant Orbs are now added to the reels, and must be gathered in order to fill Symbol Meters. There are 4 Symbol Meters, and upon being filled, each will grant an additional Free Spin. Of course, big wins are possible during this sequence, and as an added bonus, the elephant will also get his belly loaded with Golden Peanuts.

Pink Elephants 2 accepts a minimum bet of 0.10 coins, a maximum bet of 100.00 coins, and pays out an enormous 10,000x the original bet as its biggest jackpot prize. Players are sure to love its unusual theme, and more so it’s engaging gameplay and impressive payout potential.