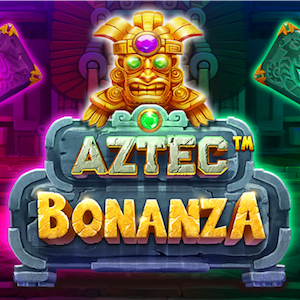 Pragmatic Play’s latest online slots release, Aztec Bonanza, allows players to travel through time, all the way back to the ancient civilization of the people of Aztec. The theme is very much a proven one, not at all unlike that of ancient Egypt-themed slots. But since theme is only small part of it and no good at all without the potential to win, chances to win big aplenty have been incorporated into the medium-variance variable pay ways online slot.

All throughout Aztec Bonanza players are challenged to unlock the sought-after totem jewel, which when discovered, is worth two-and-a-half-times the player’s base bet. The potential for the big win is ramped up even further by the cascading wins caused by the Tumble mechanic, which mechanic makes the blocks to fall away on the reels. Making two consecutive tumbles to happen will remove one of four blocked corners framing the reel-set. Cracking up all four of the blocked corners will ultimately activate Aztec Bonanza’s free spins bonus. Best of all is that a completely unlocked grid will make it possible for players to take full advantage of up to 7,776 Ways To Win.

Aztec Bonanza is all about keeping up the pace and doing it on the double, says Pragmatic Play Chief Commercial Officer, Melissa Summerfield. The online slot offers a truly thrilling experience to players and it combines everything from tumbling wins to exciting and unique features in order to achieve this goal. The expanding reel-set truly ramps up the excitement and ultimately makes the largest of wins a possibility.

According to Summerfield, its exactly this fast-paced style of play, coupled with a proven theme and ever-expanding grid, that makes this online slot to be one for the win.

Another Day, Another Online Slot

From a developer’s point of view, Aztec Bonanza makes for a perfect addition to Pragmatic Play’s impressive and award-winning existing portfolio of online slots. Pragmatic Play is well known for games that are unconventional and that offer a fresh new take on development and a modern-day online gaming adventure.

Aztec Bonanza follows hot on the heels of Golden Beauty, which offers a unique and colourful take on the Far East and was released as recently as February 27th. Pragmatic Play has certainly been keeping the new releases coming, and this seems to be a huge part of the company’s success in online slots development.