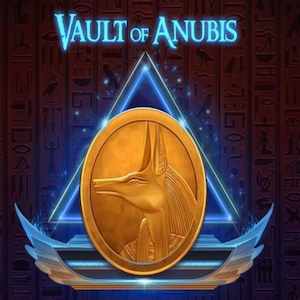 Red Tiger is a Malta-based iGaming developer associated with releasing the highest quality online slots. Their latest release, Vault of Anubis, proves that this is a well-deserved reputation. Featuring a strong visual theme, excellent gameplay, and a focus on free spins, the game stands apart for having an impressive attention to detail.

But players need to be careful, as the jackal-headed god of the ancients is watching their every move. The art team at Red Tiger have done an excellent job in capturing some of the creepier aspects of ancient Egyptian folklore, with the representation of Anubis being enough to give anyone the chills. Though it is all in good fun, as Vault of Anubis is a game that will have online slots enthusiasts everywhere deeply immersed, and thoroughly entertained.

Vault of Anubis is a 95.74% RTP cluster-based online slot, utilising 7 reels and 6 rows. Cluster based systems are quickly gaining popularity in the iGaming world, gradually taking over from the more traditional spinning reels. Though, it is clear to see why when trying out the game, with fast paced, visually appealing entertainment offered with every spin.

As far as special features are concerned, the game utilises an extra spins meter. The meter can be seen located across the top of the reels, and will gradually fill each time 4 of certain a symbol appears, namely the Vault symbol. It need not be said that a massive jackpot is up for grabs should the meter trigger, with 5,000x the original bet offered as the highest payout amount.

Other themed symbols used in the game include the eye of Horus, scarabs, a staff, and Anubis himself.

Vault of Anubis has already seen success during its one-month exclusivity deal with LeoVegas, but has now been opened up to be enjoyed by the rest of the industry. According to Carl Ejlertsson, director of business at Red Tiger, the game’s success is due to trying out something truly innovative.

He explained that the mathematical and feature system used in the online slot has been around for over 20 years, but has never implemented in a cluster grid before. The result, he elaborated, is a unique design allows for special features to be communicated very clearly and directly to the player.

He concluded that, as far as he’s concerned, it has never been more fun to travel into ancient Egypt and go looking for treasure.