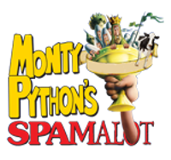 Playtech has pulled out all the stops to pay homage to one of the best acts in the entertainment industry – Monty Python.  Since the late 1960s the Pythons as they are also referred to have entertained fans and audiences with their television shows, stage shows, albums and films and were instrumental in changing the face of television. Spamalot started off as a musical which was adapted from the 1975 movie, Monty Python and the Holy Grail. Broadway shows ensued as well as wide acclaim and awards. Now Playtech have decided to further the influence of the comedic talents behind the Monty Python name with their very ambitious game, Monty Python’s Spamalot Progressive Slot game.

Monty Python Spamalot is quite a packed online video slots game that goes beyond the call of duty to give fans of the Pythons and players alike something quite authentic. This game delves into lots of the original movie’s content and uses specific scenes and sequences to provide all kinds of fun bonus games and features. Playtech have proven themselves to be particularly good when it comes to making video slot games based upon films and television shows and with their take on one of Britain’s most famous comedy teams, they have once again proven why they’re accomplished at what they do. The Spamalot video slots game uses that classic style of animation which came to define the Monty Python team and to great gaming and comedic effect.

Features of the Game

Monty Python Spamalot Progressive Slot provides its amusing entertainment across 5 reels and 20 paylines and offers up great win-enhancing features such as Scatters, Wilds, Click Me Bonuses and Free Spins. The game presents truly fun and innovative ways to score extra dosh and proceeds to do so with its wild symbol, represented by the Holy Grail. This symbol does what most wilds to – it substitutes all symbols except for the scatter to build better winning possibilities. In order get your hands on those delectable free spins you’ll need to land at least 3 Spamalot logos on the reels whereby 10 spins will be issued to you.  This feature can be quite lucrative because after each spin you could be awarded with 5 extra wilds and even 50x to 100x your bet. Spamlalot Progressive Slot offers a total of 4 bonus games and access to these fun-filled shenanigans is granted when the bonus symbol appears on reels 1 and 5 at the same time. It starts with the Storm the Castle bonus and that’s followed by the None Shall Pass bonus. Then comes The Knights Who Say Ni and it’s all rounded off by The Killer Rabbit Bonus. Each bonus offers a different fun and potentially lucrative setting. Let’s not forget one of the game’s most important attributes – the progressive jackpot which can reward with 50 000 big ones.

888 Casino plays host to Monty Python Spalamlot along with numerous other online video slot games. This well-established operator has been entertaining players as far back as 1997 and today provides thousands of players from around the world with opportunities to strike it rich. 888 not only provides hundreds of online casino games, it also provides a mobile casino app for those of you who would rather play on your smartphone devices. In addition to video slot games like Monty Python’s Spamalot, the casino also caters to sports enthusiasts by providing online sports betting and mobile sports betting opportunities.